Since the moment of appearing on the market, Lanberg has been primarily associated with a wide range of server cabinets and accessories to them. However, the manufacturer's portfolio is much larger and from now on it has extended with a new and important category of Wi-Fi routers. By doing so, the manufacturer wants to point out that the specialisation in passive network solutions was only an introduction to extending the offer and more comprehensive service of the network segment.

Three models of routers were immediately introduced within the offer, matching the current standards and price segmentation on the market of these devices. The models in the N300, AC1200 and AC1750 standards are available, all of them characterised by backward compatibility with previous standards. As the manufacturer assures, the devices were created after consultations with Internet Service Providers (ISP) and were designed with them in mind so that their use by the end customer is intuitive and in accordance with the operators' standards.

The main advantages that Lanberg mentions during the premiere of routers is the use of the latest speed standards (AC models), solutions increasing stability and network security (Beamforming, MIMO, or dual-band transmission), simplicity and intuitive configuration of devices, software in Polish and production of equipment in Taiwan in accordance with the ISO standard, which is to guarantee the maximum repeatability of the manufactured routers.

CREATED WITH ISPs IN MIND

The Lanberg series of routers has been designed to meet the expectations of not only home users, but above all for Internet Service Providers, i.e. ISPs. The heart of routers is software that was created and tested in cooperation with Polish Internet Service Providers in order to meet their needs. The software is to enable i.a. two-level access to functions sewn in (the manufacturer declares the introduction of this functionality by the end of October). Full administrator access and limited user access is provided with the assumption that an administrator determines what a user can change. The manufacturer has not forgotten about service providers using VLAN technology, used IP-TV among others . The routers also support the TR-069 protocol, while the manufacturer offers customers (ISPs) assistance in the implementation of provisioning based on this protocol.

YET INTUITIVE AND EASY IN OPERATION

Cooperation with ISPs is one side of the coin. The second, equally important, is to provide the device to the end user, who will not require any specialist knowledge or much time to act as expected. Therefore, the software and all possible instructions are prepared in Polish with home users in mind. The software is intuitive and does not require complicated actions when configuring the router.

An important aspect stressed by Lanberg is the production of routers in Taiwan based on ISO standards, which is to guarantee maximum repeatability and compliance of products with standards. In this way, the manufacturer wants to eliminate cases known from Chinese factories, when individual batches of routers differed from one another, causing problems with use. The combination of the Polish concept and Taiwanese accuracy in production is to guarantee as repetitive and functional products as possible.

Lanberg declares that care was taken to make each of the routers guarantee what home users expects from them as regards their functionality. The fast and stable Internet with simple configuration and management capabilities. The routers operate in modern standards N300 as well as AC1200 and AC1750 (depending on the model), guaranteeing a very fast and stable transfer, which in the case of AC1200 and AC1750 is dual-band, thus providing a stable network even when using a large number of devices at the same time. In addition, the routers have several other interesting solutions:

• MU-MIMO TECHNOLOGY - The use of two/four receiving/transmitting antennas allows to increase the network capacity, increase its resistance to transmission losses and extend its coverage area. Thanks to MIMO technology, our network will be more stable.

• AUTOMATIC BANDWITCH SWITCH - This function is an intelligent solution increasing the precision of transmission. When there are multiple other Wi-Fi networks near the router, they may interfere with one another. The router detects this situation and automatically changes the frequency from 40 MHz to 20 MHz, ensuring the highest quality of service.

• INTUITIVE MENU (PL) - an easy to use, intuitive and transparent menu in Polish. The scope of the router's configuration allows, among others, to set the schedule of wireless networks and parental supervision by setting the time of access to Wi-Fi. 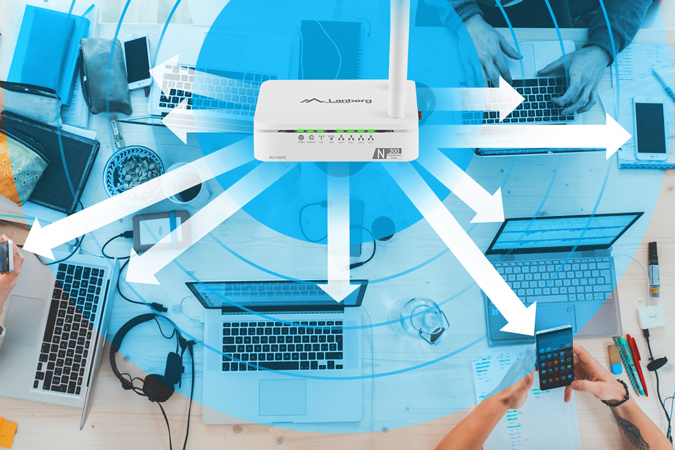 The configuration also includes many other options to customise access filtering according to the user's preferences.

• POSSIBILITY OF NETWORK CLIENT ISOLATION - The router enables client isolation in Wi-Fi networks. This feature is especially useful when creating a network with a guest function.

• EXTENDED GUEST FUNCTION - A guest function has been extended with additional features. Now, the user can create up to four different additional wireless networks. Each of them will be independent from other VLANs, which will allow to connect e.g. a TV decoder via a Wi-Fi network. When we add a standard option to create wired VLANs on each of the LAN ports, we double our possibilities in this area.

• WPS 2.0 - Thanks to the WPS button, the user gains the possibilirt of quickly connecting the device to the router while maintaining high network security standards. Now, it is no longer necessary to configure each device and enter complicated passwords to connect it to the router. It is enough to click twice, enter a short pin - ready!

• HARDWARE NAT - In comparison to the software solutions, the Hardware Nat makes the bandwidth of the router noticeably increased. Thanks to this solution, we save time especially when downloading large files.

FLEXIBILITY AND VERSATILITY OF DEVICES

Each of the routers offered by Lanberg has 5 modes of operation, which increases the universal character of these devices. In addition to the classic router mode, they can be used as a repeater increasing the signal range or as an access point (AP). The Client and WISP mode, i.e. receiving the Internet from the provider via radio instead of the classic Ethernet, are also available. The latter solution is gaining more and more followers these days.

DEVELOPMENT AND PLANS FOR THE FUTURE

Lanberg declares that three models of routers are just the beginning of development of this category. In the next year, the manufacturer declares i.a. the introduction of models using USB 2.0/3.0 as well as to work on software to support load balance and address the issue of LTE modems. As routers are not the only new category in Lanberg’s portfolio, a significant expansion of the product offer can be expected in the near future. This website uses cookies to provide services at the highest level. Further use of the site means that you agree to their use. Read more